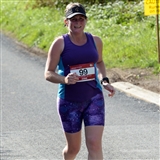 I did no fitness or exercise through my teens, twenties or thirties, then became involved in sidecar racing in 2009. In 2014 I discovered the joy of outdoors with muddy bootcamp sessions and trained hard for my F2 sidecar passengering, but running was never a focus. I had flirted with running briefly - a 10k in late 2009, the Great South Run in 2010 - but didn't enjoy it. After an accident at the 2013 Isle of Man TT I took a short break from sidecars, but did my first Obstacle Course Race (OCR) in late 2014 and was instantly hooked. A friend suggested I join a club in late 2014 to take part in some muddy club cross-country (XC) races. After retiring from motorsport I moved to Somerset in September 2015 and took to running with a vengeance. I discovered the 'delights' of Ashton Court parkrun, joined Bristol & West AC, and all the time kept my motivation up by going off to do OCRs all round the country. In 2016 I suffered a series of unrelated injuries which curtailed my PB-streak, but discovered longer OCRs and longer runs. I completed my first unofficial Half Marathon, then Marathon, then an official Ultra (30 miles) during the year, and also qualified for the OCR World Championships. Throughout all of this I found that I took greatest pleasure in encouraging others to run, and seeing their delight when they achieved their goals. That may be for running for 1km without stopping, smashing a parkrun PB, or taking on their first race. Whatever their goal, I loved having helped them find their foundation blocks.