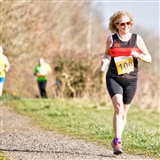 I originally started running in 1986 to lose weight after my second son was born. After a couple years I stopped due to the commitments associated with two small children Over the years I tried different forms of excercise but never stuck with anything for long. In 2011, tired of queuing for a turn on the machines at the gym I turned again to running. My neighbour saw me out and invited me to the local Parkrun which I loved. I met lots of people some of whom had joined a group started by Run England which changed its name over time to Run Together. This year I decided to give something back by training to become a volunteer Run Leader. To date I have completed over 200 Parkruns, 10 half marathons and numerous 10ks. I love running, the friendships I have made, the support I have received are invaluable.