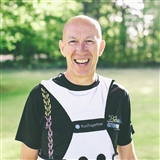 Tony took up running in 2002 to improve his physical and mental health and got the bug straight away. Initially his target was to run the Manchester 10 km every year and raise some funds for local charities but in recent times he has run longer distances, including marathons, and also competed in races. He enjoys running in groups as he finds it has helped to spur him on to meet new running challenges and has made some great friends along the way. In 2016 he took the Run Together Run Leader course and uses this to help others achieve their running goals, something he finds extremely satisfying and rewarding.