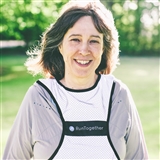 I started running in 2009 as I wanted to exercise outdoors. At first it was a case of walk 200 metres, run 200 metres! I discovered Parkrun in Heaton Park; the support from the other runners really motivated me. I then decided that some additional training would help and joined the Run Together group on Monday evenings. In 2015 I did the Group Leader training with Angela. The group has gone from strength to strength and we have a fantastic mix of abilities so there is something for everybody. I wouldn't go running if I had to run alone; give it a go and see if it works for you!