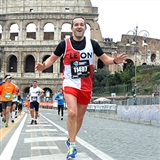 Leon started his running journey in 2009 when he and his wife Tania decided it would be a good idea to take part in the Great North Run and try to get a little fitter, after training for six months and gradually building up the length and duration of each training run he was ready to take it on. After that he was hooked! and several half marathons followed along with five full marathons, the highlight of which were Venice and Rome. In 2019 he will be running the Great North Run again and hoping to improve on the first one. Having recently completed his 100th Park run he is looking forward to the next park run milestone, although he may have to wait a while for his 250th T shirt!!