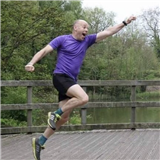 But.... of everything I love parkrun and being Arrow Valley Event Director. I have the event to thank for introducing me to running friends, inspirational people & leading me on a path towards coaching others. Will hit 200 runs in Oct 2017 which is a long journey from that first 1 mile loop around the back of my house..!!