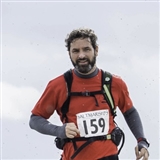 I started running in 2007 after rashly signing up for the Chelmsford Race for Business. Turning up after doing no training in a pair Reebok Classics and cotton 'sports wear' added to the challenge but I got round and gained two MASSIVE blisters that prevented walking for about three weeks. The running bug got me at that event and after rashly signing up to complete the Hastings Half Marathon the following March it seemed that some training had to be completed. Now I thought, if I was bothering to train for a half, I may as well do a full marathon. I rashly signed up for a RNLI charity place for the 2008 London Marathon. Its one of the best experiences of my life... Since then I've completed many more rashly entered events and not completed others, like the Saltmarsh 75 in October 2017. Not completing has mostly been due to not training enough... Perhaps there's a theme emerging here!!