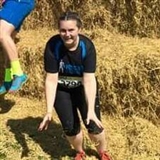 I never really loved running even though my whole family had the bug. In fact, a part of me was stubborn for many years. My answer was always no when asked to join them on a run. Then a couple of years ago, I went out for a run with my mum and actually survived it. It wasn't easy but I challenged myself to try again a week later. The rest is history as they say. I started running regularly when I met the lovely people at Moorside Park. We would go for a little run before our circuit on a Saturday. A couple of us then decided to start running on a Thursday night. It started with a handful of people, most of us pure beginners and there was a conversation about setting up an official group. I was all for it as I wanted to help others find out that running isn't actually that bad. The group have helped me train to do various 5km runs and I am now in training for my first 10km in February, followed by another in March. I don't think that I would have had the confidence to do this if it hadn't been for this group.
I decided to volunteer to become a run leader because I wanted to give something back to the group and especially help those people who are brand new to running. It has been great to see the run club develop from the couple of people at the beginning, to a really successful group which is ever growing.