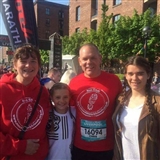 Having been somewhat of a nomad before moving to Crosby, joining the Run Club has allowed me to cement roots along with the added bonus of meeting some fantastic people.

Growing with the club I have now become a run leader and it has allowed me to give something back for all the support and encouragement I was given when I first joined.

Seeing people grow and go from strength to strength shows that the social side of running is just as important as the distance. One thing is for sure, without that I wouldn't have continued running.

The proof of that is going from non-runner to running the 2017 London Marathon in 3 years, if I can do it anyone can.