Testimonials from some of our members 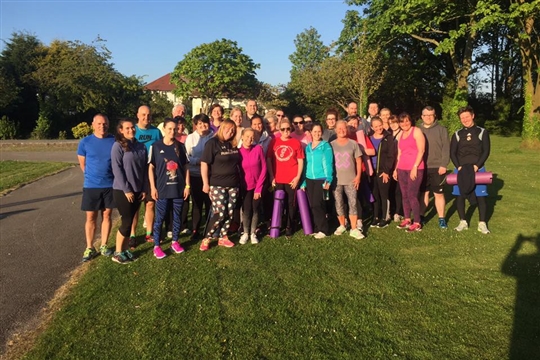 I joined run club to improve my fitness and to hopefully run a 5k, without stopping within a few months. Once I joined I knew being part of a group would spur me on. Not only have I now run a 5k, I have completed a 10k now working towards a half marathon (mindset permitting!). I know I couldn’t have done this without the support of group and Jim the run leader who is so so supportive and encouraging. I’ve made new friends and feel part of something really special. I just LOVE our runclub

Brian, has been a member of Run Club since April 2015:

Having been a runner for more years than I care to remember my training had become a tad boring. I needed something new to rejuvenate my rather jaded routine so joined Moorside Park Running Club. Having experienced less welcoming running clubs I wasn’t sure what to expect, but found the club to be very welcoming and friendly.

There’s a wide range of experience within the group, but everyone is catered for, running with others of similar ability. The Run Leader has his work cut out to come up with new routes for the different groups each week, but he always manages it.

Angela, mum of 2 and new to the area has been a member of run club since April 2015:

After 10 years living in North Wales I returned to Crosby and I am so pleased that I joined the run club.  I was looking to get fit and the mixed abilities, great group of people, lovely sense of community, and warm welcome really helped me to regain my running mojo! I managed to complete a 10k race after a couple of months. I have met lovely, supportive people and enjoy getting involved in the fund raising activities with my children when time allows.

Looking forward to getting back after my knee injury, the club has continued to support me and stayed in touch. I have really appreciated this.

I would recommend the run club to anyone of any age or ability. A warm welcome awaits you, the opportunity to get out and about and get fit too