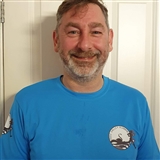 I started running in 2016 when a mate asked if anybody would like to join him in a half marathon. I probably hadn't run since leaving school more than 25 years before that. It's one of those things I'd thought about each year, growing up in Stroud, Gloucestershire I lived on the half marathon route there very close to the start/finish but had never 'got around' to entering. After 6 weeks of training, some of it painful and initially reluctant, I completed my first half marathon and was very pleased to beat my mate in the process. I re-entered the next year and also completed Stroud half marathon that year with my daughter. We moved to St Neots in 2017 and for a year or so I did a bit of running around the area but nothing regular and very little more than 5-7K, I'd looked at the local running club, they ran past my kitchen window every week, but to be honest they all looked good and a little intimidating. Then I saw a new social running group advertised and signed up for the first run. I really enjoyed running with a group, it gave me so much more motivation to get out there and meeting likeminded people completely changed my outlook on running making it more fun, there really is nothing better after a long day at work than getting out for a run with friends, having a bit of a laugh and putting all those niggles from the day to bed. It really does wonders for your mental health. I enjoy running with people that push me and it's great to know there is always someone who is faster or can run further for motivation, but more than that it has been really good to encourage and help those just starting out or getting back in to running with the couch to 5K and welcoming new people to the group.