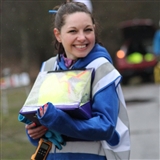 I built up my running distance and completed a few half marathons before deciding I wanted to be a run leader and engage other people in running.
After qualifying as a Run Leader, I established a C25K programme, driven by a passion for getting new people into the sport. And just to make sure they stuck at it, I led the development of Prudhoe Riverside parkrun, as Event Director in 2016. In 2017 I qualified as a Coach in Run Fitness and realised a lot of my injuries were from poor running form. No one ever tells you how to run without hurting yourself, so at Plodders we do.
As a coach, my primary aim, before you even put your trainers on, is to promote self belief. As John Bingham said "If you run, you are a runner. It doesn't matter how fast or how far. It doesn't matter if today is your first day or if you've been running for twenty years. There is no test to pass, no license to earn, no membership card to get. You just run."
In 5 years I have progressed from the couch, to marathons, to coaching, to becoming an Ironman. I even picked up 'Sports Personality of the Year' at the Sport Tynedale 2017 awards. At Prudhoe Plodders we welcome anyone, from new runners, to those returning to sports. Each athlete is equally as important to us regardless of ability. And if I can do it, anyone can!