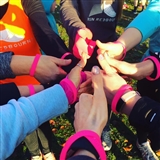 I joined Rachel to help start Run Redbourn! as a run leader in June 2016 and running is now a large part of my life for fitness and well being with the occasional event thrown in. I have now run two Marathons, London in 2018 in 4 hours 32 and went onto run Paris in 2019 in 3 hours 38. I think this demonstrates how being part of Run Redbourn! has helped me progress.