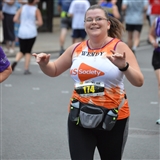 Wendy started her running journey in January 2018 by joining the Rushmere Community Runners' first Couch 2 5K course, and although she found those initial first few weeks very tough, she stuck with it and, as a result, completely fell in love with running! Asthmatic, and by her own admission, carrying a little extra weight, Wendy is proof that, whatever your age, ability or fitness levels, that anybody can run and get the same enjoyment and health benefits from running that she does. To date Wendy has taken part in several events, including: Alton Water 5K, The Summer Series in Christchurch Park, Twilight 10K, and she even completed the Great East Run - going from couch to half marathon in just nine months! Wendy is now planning a number of events for 2019, including her second half marathon, maybe even a third... Wendy says that the help and support that she's had from fellow RCR members and run leaders have really helped her to achieve what she always thought was out of reach for her, so much so that she's really got the running bug and can often be found persuading others to join her, and just get out there and run! Becoming a run leader has meant that she is able to give back the Running Community that she loves. Wendy believes that running should be fun and inclusive to all, and that all runners should be encouraged whatever their fitness level or ability. Wendy has completed the England Athletics Leader in Running and Fitness qualification.