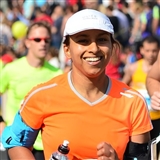 I moved to Thamesmead with my husband in 2016 and was eager to start a local community running club in Thamesmead. We have fantastic routes on our doorstep with nature parks, canals, woodlands and the Thames Path. I see many a runner out on them - so let's get London's best running club going! I am a medical doctor by trade and keen on promoting local community, positive mental health and physical fitness. My own running has taken me: around Australia, to be part of a running club in New Zealand, around Fiji, Raratonga and Tahiti as well as LA, around London, European cities and previously to be part of a running club in Basingstoke. I started being a regular runner in Autumn 2008 when I could only go for 10-15 mins before having to walk to rest. I went on to complete my 1st marathon, Paris in April 2009. I have also competed in: Ironman Tallinn, Big East Triathlon, The New Forest Half Marathon Paris Marathon 2009 Run to The Beat Half Marathon (Greenwich, personal best) Athens Marathon 2015 (over 30km uphill and my personal best). Edinburgh Marathon 2017 London Big Half 2018 Olympic Park 10kms Greenwich Park 10kms Danson Park 10kms *1st Female (2018) The London Big Half Colchester Zoo Stampede Half Marathon I am an England Athletics Certified Coach in Running Fitness, Run Leader and Run Leader Mentor. I am excited to be using these skills to develop new run leaders in our club and mentor other run leaders further afield to set up their own running groups as well as coaching our club runners in good running form, technique, injury prevention, running for endurance, speed and hills and achieving their own personal running goals. I am enthusiastic about getting an active running club and community going in Thamesmead and through it to make running a diverse, all year round accessible, enjoyable, community sport that improves physical and mental health of the people of Thamesmead regardless of age, experience, gender, background. I look forward to running with you.