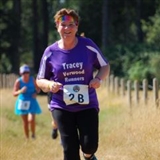 Running for how long: Since March 2017 when I signed up for Couch 2 5K with Verwood Runners.

How did you get into running: My daughter took part in a Pretty Muddy 5K in 2016 and then challenged me to join her the following year. I took up the gauntlet (albeit 9 months after she initially challenged me) and the rest is history.

What's your best experience of running so far: Too many to choose from but my first 10K in September 2017 and competing in two Half Marathons last year are up there.

What type of music do you run too: I rarely do these days, but if I do it's very varied and probably consists of more 80's hits than anything else

What do you get up to on a typical weekend: Parkrun most Saturdays, volunteering at junior parkrun some Sundays, races (try to enter one a month) and general family stuff

What's the best thing about Verwood Runners: It's a good job I only have to state the best thing or the list would be endless! The support and encouragement from an incredible group of people.

Give one unusual fact about yourself: I was one of a few chosen pupils at my school to plant a tree in the New Forest for the Queen's Silver Jubilee in 1977

What makes you laugh:
Lots of things - I am usually seen with a smile on my face - most of the runs I have taken part in have resulted in hysterical laughter with my friends, so I suppose the answer is my friends!