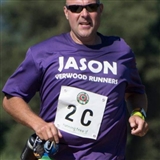 Name: Jason Oakley Running for how long: Since 2014
How did you get into running: After giving up the gym and then not really doing anything I thought i'd try the C25k program a try and haven't looked back

What's your best experience of running so far: Lytchett 5k relays a really fun event, and Verwood runners C25k course it's great seeing everybody's achievements and how well they all do. It's amazing what you can in do when you put your mind to it.
What type of music do you run too: none i like to listen to Jeremy Vine if i'm on my own(a little weird I know)
What do you get up to on a typical weekend: parkrun at Moors Valley or a bit of parkrun tourism and i'm also on the core team for Moors Valley juniors on a Sunday so an early start
What's the best thing about Verwood Runners: the support, the encouragement to try things (some would say peer pressure), the camaraderie and friends i've made along the way
Give one unusual fact about yourself: i've appeared on Top Gear with Jeremy Clarkson Richard Hammond, James May and the star in the reasonably priced car was Vinnie Jones Jeremy Clarkson made me sit in a Ford KA and then referred to me and said "it looks like a man in a skirt"
What makes you laugh: Michael Mcintyre, and some of the comments on out facebook group