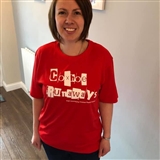 I started running in 2012 having never run before! It followed the death of my first child during labour. My world as I knew it had fallen apart, I needed an escape and I needed something to focus my mind on.

My husband decided to do the Great North Run in memory of our little boy; I wasn't ready for that but started to do ParkRun only doing one lap at first and then started to enter smaller races to raise money for a charity that had helped us.

In 2014 my second child was stillborn and our world fell apart once again; this time my mind was set and I was going to raise money for a cuddle cot used to keep babies with their families for longer after loss.

I met a group of amazing people who were also training for their first Great North Run and we became great friends. The rest as they say is history, I now run for the pleasure of running, running has changed me and changed my life.

Now I'm part of Coxhoe Runaways because I want to help others, I want to help anyone who is wanting to give running a go, whatever their motivation as running can be amazing!