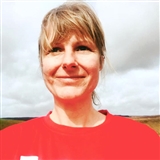 I love running! But more than that I love showing other people that they can run. That they don't need to run 8 minute miles or run for 10 miles+ to be a runner...you just have to run!

For 7 years I was my husband's cheerleader. He started running after his Dad unexpectedly passed away at the age of 54. He completed various running events including ½ marathons and marathons; raising money for several different charities and I am still immensely proud of his achievements.

I loved that he ran (notice the HE and not ME) especially once the kids arrived; not only did it give him some time for himself but I felt it was also teaching our kids important lessons about life such as you can achieve anything you put your mind to, don't quit when it gets hard and so on.

I had absolutely no inclination to be anything other than a cheerleader.

After the birth of our first daughter I developed post natal depression and struggled with everything about being a new mother. My midwife told me how running had helped her and had given her a bit of her identity back so it was with that in mind that I started my running adventure and began running with a friend. I later found RunTogether and now run as part of a few of their groups.

I've been a recreational runner for nearly 8 years and throughout that time have completed different distance events and sometimes have just run for fun.

For me it's about enjoying the scenery, giving me some quiet time to process my thoughts, socialising with others, pushing myself to achieve something I never thought I could and showing other people that running isn't as difficult as they may think it is and we all know that it's good for both emotional wellbeing and physical health.

The best thing for me about running is the wonderful people I have met along the way - they have had a such a positive impact on my life.