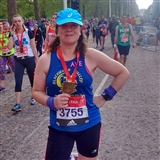 I passed my 'Leadership In Running Fitness' course in 2016 whilst training for a marathon in Amsterdam.

At school, which was a very long time ago, I hated running; I usually came in near the back, red faced and puffing away with exhaustion. So, in 2014 I decided to get myself fit and lose some weight and I started my journey on the 'Couch to 5K' course. It was at week 6 that I actually felt I could run. "Me, a runner?", I would laugh out loud to myself. My first 5k was at the Rushmoor parkrun and I was so surprised when I'd finished and there the team was, waiting for me and applauding as I went through the finish funnel. Since then I've joined an amazing running club and completed 5k's, 10k's, half marathons and 2 full marathons. London Marathon was an unforgettable experience and having so many people shouting your name was so emotional but fantastic at the same time! Even more amazing were the people running along side you who were all supporting, smiling, crying and sharing their stories with you.

People ask me what the hardest thing is when you start running and I'd honestly say it was the fear of seeing somebody I knew. What would they shout out at me? What would they think seeing me exhausted and sweating?

Well that day eventually arrived and all they shouted out was "Go on Ave! You're doing so well". I could have died of embarrassment as I tried to run faster and pretend I had run for ages. I remember turning the corner and struggling to breathe from trying to show off. In hindsight, I now know how silly it is to think this. As long as you're out doing something for yourself and getting fit, you shouldn't worry what those around you think. Most people, in fact, are probably impressed that you're trying.