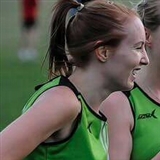 I started running to lose weight after the birth of my first child. Whilst pregnant I ate one too many pies and piled on A LOT of weight. With neither the time nor the money to re-join the gym I donned the only things that fit, a pair of grey ill-fitting yoga pants and my husband's t-shirt, and embarked on my own unstructured version of a couch to 5k that saw me lumbering around South Manchester like an injured postnatal elephant. It was hard work and I didn't enjoy it. One day, 6 months later I went out for a run and something clicked; it wasn't hard, it was actually enjoyable (who knew?!) Since then I've competed across all distances; 5k, 10k, 10 mile, half marathon, 3 full marathons and a 36 mile ultramarathon, but my favourite distance remains the 10k. My biggest running achievement is running the Notfast 10k in 42 minutes. I never in a million years thought I'd ever see the day when I'd be able to do that. I also love taking part in 24 hour relay races as part of a team. Since joining Grantham Running Club I've qualified as a UKA Coach in Running Fitness, building on my Leader in Running Fitness qualification, and hope to undertake the Event Group Endurance Coach programme later this year. I'm also a Run Director at our local Parkrun. Top running tip for beginners: Persevere even though it's hard. You'll love it in the end, I promise! Don't do too much too soon. Oh, and do parkrun - it's awesome