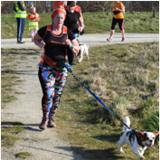 Kirsty holds the female world record for having completed 0 to 100 marathons in the quickest time. Amazingly Kirsty joined us in the summer of 2014 and in that short time has established herself as an integral team contributor. Kirsty loves running with her dog Kingsley and can often be seen encouraging other people on through her own effusive love for running. Kirsty is well know for entering race events to get her 'bling' (medals!!!) and for running several marathons/ultra distance events over a weekend! Kirsty has now completed 300 marathons/ultras including a 100miler event!