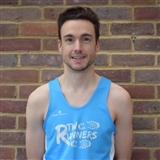 Joe's first running experience came following the 2012 London Olympics, when he was inspired by the success of Team GB and decided to go along to his local club, Tonbridge Athletic Club and he has been running ever since. In February 2017, Joe was awarded with "Most improved athlete" at the Club for the and in October 2018 was a runner-up in the "Sports Achiever" category of the Tunbridge Wells Borough Council, "Love Where We Live" awards.

In April 2014 Joe became Event Director of Royal Tunbridge Wells parkrun - a free, weekly 5km that takes place in Dunorlan Park every Saturday at 9am. The event which is run entirely by volunteers from within the local community has grown steadily and in October 2016 the event was awarded, "Best Group" at the "Love Where We Live" awards; the event was also runner-up in that same category the following year (2017).

During the summer of 2017, Joe completed a 6 week intensive Personal Training course in London and qualified as a Level 2 Fitness Instructor and a Level 3 Personal Trainer. More recently, Joe qualified as a UK Athletics Event Group Endurance Running Coach in April 2021.

Although Joe has only been running for 9 years, he has learnt a lot during that period and is keen to share his love and experience of running, health & wellbeing with others.

Joe is currently training for the 2021 Budapest marathon, which will be his third attempt at the distance - his goal is to run sub 2:50.