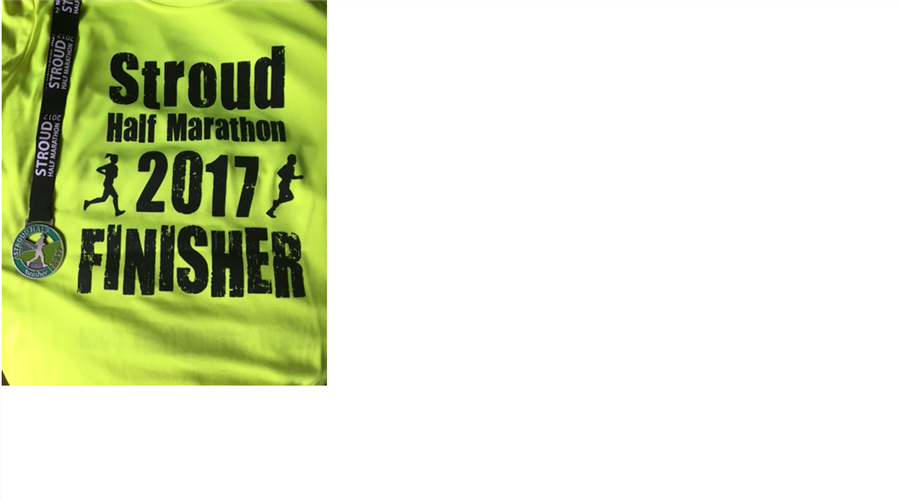 Some people have issues buying shoes, or bags, or trainers, or toys etc. I have issues signing up for races……

Rewind to a few months ago when William posted on the Facebook group about a group entry into the Stroud Half Marathon. Having not long ago done the Bath Half and “wasn’t doing any more half’s” I offered to come along and be support crew – already had my green pom poms at the ready.

Fast forward to just before the Bristol Half (remember the no more half’s) – and as the training for once was going relatively well and I was feeling quite positive about Bristol – once Petra posted that her place might be going spare, the familiar feeling crept back in again – one more won’t hurt…… duly signed up a few days before completing Bristol.

Having completed Bristol at an ok pace – all I had to do was continue with the training to keep it going until the four weeks till Stroud – three Fridays, three attempts at long runs, three disasters through one way or another.

Managed a decent 6 miles the Friday prior to Stroud though so felt relatively ok.

On the morning of the race – up at the crack of dawn to get to Alans house – a comfortable and relatively short journey to Stroud, quite pleased by the availability of close parking, a short walk to the school to mingle and put bags in etc. Plenty of toilets and although the queues were relatively long they moved quickly.

After the obligatory team before photo we made our ways to the start – I headed to the rear. I soon found Matt Iles who had very kindly agreed to pace me (there’s my easy ride out the window then) told him all I needed to do was beat 2:40 simple as that……..

Started off a decent pace actually having to slow down for once – remember it’s a marathon(half) not a sprint, the route although not technically flat couldn’t really be described as hilly – the were mere slopes – and what goes up must come down so there were also plenty of downhill sections. The route was on open roads so there was a small element of traffic but nothing too horrendous. Matt was very efficient at keeping me going – mainly by shouting at me (in a nice way) but also by being very encouraging. The difference in training from Bristol to this was becoming apparent and from mile 8 I really had to work hard, but because we had maintained a steady pace we were doing ok. We got towards an industrial area loop and briefly went past the Rock Choir – was looking forward to seeing these properly on the way back round – this part also allowed us to see the runners coming out of the estate so was a boost in a way. On our way back round – the Rock Choir had started packing up and were leaving which was a shame. At this point we must have been around mile 10 or so and because we had taken a steady pace throughout we actually started picking off groups of runners and overtaking several who had evidently gone off too quick or had not paced themselves – perhaps we should rent Matt out??? Back on the last mile and an incline back to the finish (stupid place to put a hill) having to dodge the pedestrians, buggies and the traffic was a bit of a pain but then Matt started asking what time I was after again and kept looking at his watch – clearly it was going to be close – on that note I legged it towards the finish as I commonly do so now – somewhere I had the energy to sprint the last part and managed to finish in 2:39:48 a whole 12 seconds under the time I wanted. Armed with a nice t shirt and awesome medal I went to meet the others and get some of Alan’s lovely cake then a short trip home. All in all a thoroughly enjoyable half – very low key, non-commercialised, friendly and well run half. Highly recommended for those of all abilities.

Until next time's “bright idea”

Group running is a great way to keep fit and healthy. You’ll get plenty of motivation, support as well as making new friendships.