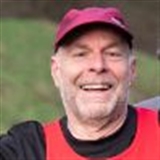 Malcolm had a very active sports career during his School and University days, but after many years of relative inactivity, he only started running again in January 2015, through the very first Couch to 5K in Chorley and discovered a love of running. He progressed his running through volunteering and leading Couch to 5 Km groups and the subsequent follow on maintenance and progression groups. He became a Leader in Running Fitness (LIRF) course in 2016 and has helped lead running sessions since 2015 to help those who complete a C25K course to continue running and make it a healthy habit. He is keen to pass on his own love of running to others through leading and coaching and this has led him to become a qualified Coach in Running Fitness (CIRF) and in 2020, became an Event Group Endurance coach . . He is an England Athletics Mental Health Champion to help promote the positive benefits of running on mental health. He has personally felt the benefit from the positive impact of regular exercise and running, in particular, on his own Mental health. He is also a trained Guide Runner and fully First Aid trained. He has been appointed an England Athletics Run Leader Mentor to help support and mentor new Run Leaders across the North of England. He enjoys running Trail and Road Running events up to and including Half Marathons and has run in many events in the UK, Spain, Germany, Canada, Ireland and the USA.